19 Surprising Facts about the Ethiopian Culture (for the newbie)

19 Surprising facts about the Ethiopian Culture

There are 54 countries in Africa, and only Ethiopia and one other African country were never colonized. The story goes that Ethiopian tribes were at war with each other. But when the Italian invaded on March 1, 1896, they banded together and achieved victory against the invasion at the famous Battle of Adwa. The date has become a national holiday and is still celebrated today.

While the rest of the world is halfway through the year 2019, Ethiopia is currently in year 2011. This is because the country observes the Julian calendar (most of the world is on the Gregorian calendar). A great time to visit is during Ethiopian New Years celebrated the second week of September. Regardless of when you arrive, enjoy peeling back time and being 7.5 years younger than you are now!

The Ethiopian calendar not only has a different year, but also a different way of calculating months. Instead of alternating months that are 30 or 31 days long, the Ethiopian calendar has 12 months that are each 30 days. The 13th month (yes there are 13 months in their calendar) contains the “extra days” and is only 5 or 6 days long depending on if it’s a leap year. That’s why Ethiopia’s nickname is “Land of 13 Months of Sunshine.”

Ethiopia actually has several other nicknames. The official slogan is “Land of Origins.” That’s because, Lucy, the oldest homo sapien skeleton ever discovered was found in Ethiopia. (If you’re looking for things to do in Addis Ababa, you can visit her at the National Museum). You might also hear “Abyssinia” which is the country’s ancient name. Or “Shegar” which is the nickname for Addis Ababa.

This one is particularly important for travelers. Ethiopians begin telling time at sunrise. That means that 7:00 am is told as “1:00” by locals. An easy way to remember is to always add or subtract 6 hours. So 2:00 is 8:00 and 11:00 is 5:00 in Ethiopian terms. You don’t need to worry about it when staying with us– our team and website only refers to international time.

But when scheduling with locals or tours, make sure you ask, “Ethiopian or Foreigner time?”

A common phrase you’ll hear is “Inebele,” which means “Let’s Eat.” In Ethiopian culture, it’s expected to offer your food to those around you. At a crowded restaurant, you’ll overhear locals say it to the table beside them if they are served first. Or if you’re walking down the street while eating, you’ll surely have several by-standers say it. As a traveler, locals know that you won’t understand or probably feel comfortable sharing food like this. But don’t be surprised or alarmed, if strangers invite you to share a meal or take a bite of their snack.

Ethiopians were the first to discover coffee (you’re welcome world). As such, the drink is deeply embedded into their society. Most city dwellers enjoy drinking a macchiato at least once per day. If you’re vegan or have a dairy allergy, make sure you request a “Fasting Macchiato” which uses soy milk.

Whatever you do, don’t leave Ethiopia without experiencing a traditional coffee ceremony. Made in traditional clay pots, you’ll be served three rounds of coffee in tiny cups. The first round is very strong, while the subsequent cups get more watered down. In the Ethiopian culture, coffee ceremonies always include incense and popcorn.

It’s also quite popular to be served a vibrant green leaf with your coffee called, “Tena-Dom.” It means “The Health of Adam” and is known internationally as “Grace Herb.” It adds an antioxidant boost and unique taste to your morning drink that most travelers find enjoyable.

Unlike the rest of the world, which is usually filled with busy schedules and long check-lists, the Ethiopian culture is very community centered. People always come first. Even if you run into someone clearly running late, they will always make time to stop and talk. For the newcomers, the slow pace and casual time can feel a bit “inefficient” at first. But eventually you’ll realize that being community centered is one of the beautiful values of the Ethiopian culture.

Ethiopians are a very proud people. And for good reason. They were the first country to send an Olympic athlete to a race barefoot (and he won). They were the first African country to fly a pilot across the Atlantic Ocean. The first African to drive a car was Ethiopian Emperor Menelik II in 1907. And most recently, Ethiopia was the first country to plant over 350 million trees in 24 hours! The list could go on. If they’re not first in the world, Ethiopians are usually first in Africa to accomplish some great feat.

The Ethiopian cuisine is centered around injera, a fermented crepe-like food made from teff grain. It’s served with every meal. You’ll love it or hate it. There is no in-between. But for the health conscious individual, it’s a great gut-friendly food off the charts in iron, calcium, and fiber.

The proper way of eating injera is by using your right hand to roll up the injera with accompanying stews in a clockwise direction.

Raw meat is a delicacy in Ethiopian culture. Locals eat it in big chunks (called “Tray Sega”) or ground (called “Kitfo). Dip it in a spicy barbeque-like sauce and cheese before enjoying. Travelers may want to think twice, however,  as it could cause you an upset stomach or give you a worm.

Greetings are everything in Ethiopia. A typical greeting is three kisses on the cheek, however, it can be up to four or five kisses if you haven’t seen the person in a long time. This applies for men and women. Another popular, less formal greeting, is to shake hands and then tap your shoulder to the person’s opposite shoulder.

It’s also not uncommon to shake someone’s hand and remain holding their hand for the next few minutes while you chat about what’s new.

Or “Whaz, Whaz,” as they say here.  Traditional Ethiopian dancing is a celebration of culture. The country is composed of 80 different tribes each with their unique moves. An oversimplified way to generalize it is in the north the dancing mainly involves moving the head and neck. Tribes further down begin using the shoulders. The central part of the country starts to incorporate the waist. And by the time you’re in the south, it’s full body and jumping.

Dancing is so embedded in the Ethiopian culture that it’s one of the top things to do in Addis Ababa. Don’t worry about doing it perfectly. Just have fun and enjoy.

Ethiopia is comprised of over 80 different tribes. Some of the bigger, more well known ones include: Tigray, Oromo, Amhara, and Guargey. Each culture has their own language, specialized food, and unique traditions. Despite recent tensions, the Ethiopian culture is overall very peace loving. 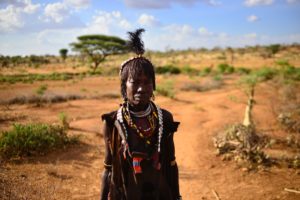 15. Stand up for the Elderly

The Ethiopian culture shows high regard for the elderly. It is traditional to stand out of respect when an older individual enters the room and bow your head slightly.  You should also offer your seat on the bus if you’re in the front row.

Even the way elders are addressed in the language is with special suffixes indicating extra politeness.

In Ethiopia, there is a word meaning “Cursed” that is pronounced very similarly to the popular name “Kasey.” If this is your name, be prepared to get some funny and alarmed looks when introducing yourself. And perhaps adapt the nickname “Kay” while in town.

17. The Most Hospitable People on Earth

The Ethiopian culture is one of the most welcoming, friendly, and hospitable in the world. As a traveler, don’t hesitate to ask someone on the street for directions or help finding something. Ethiopians take it as an honor and even a religious mandate to show kindness to foreigners.

Ethiopians are very traditional. In a culture as ancient as this one, the old way of doing things is very revered. That’s partly why Ethiopia is so lovely to visit. The beautiful values have remained strong in a quickly changing world. But it also has important implications for business people and investors. New products and services that do well in other countries might not be easily adapted here.

Ethiopia is a very religious country. The country is 45% Orthodox Christian, 20% Protestant Christian, 30% Muslim, and 5% other.

Ethiopia is mentioned several times throughout the Koran and the Bible. For Christians, the references are even more profound. Queen of Sheba was Ethiopian and thought to have born a child from King Solomon. Also, the Hebrew Ark of the Covenant is considered by many to be located in Ethiopian’s northern town of Axum.

Despite the differences, everyone integrates very well together and are exemplary leaders on religious diversity.

Ethiopians were very prominent traders in ancient days. By trading in Europe, they were exposed to new architectural concepts like castles which were built in the northern city of Gondar. The eastern city of Harar, known as the Mecca of Africa,  also became a center of regional trade and is said to be the first city Muslims migrated to from the Arabian peninsula.

Did you find this quick snapshot of Ethiopian culture helpful? Share it with your friends, and tell us which fact surprised you the most in a comment below